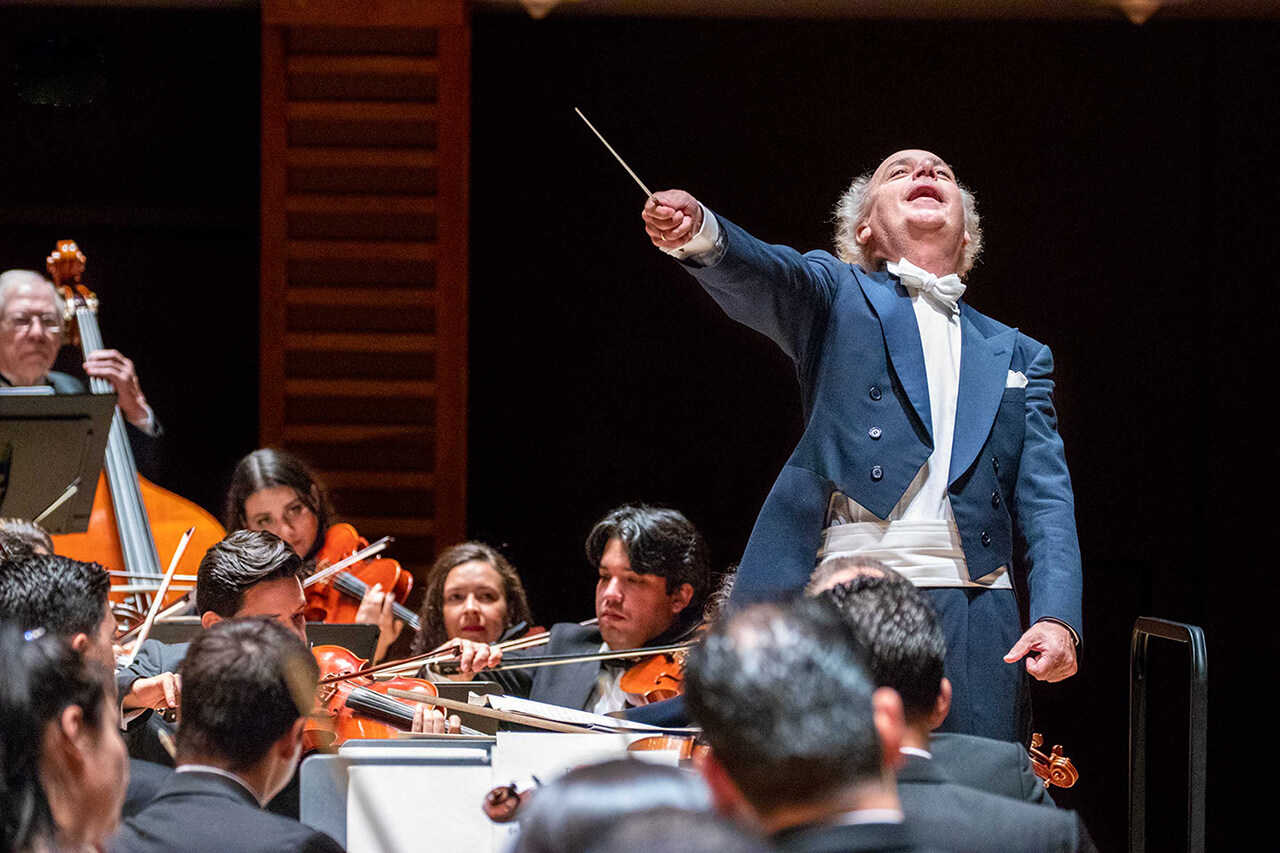 Eduardo Marturet enjoys an active career on three continents; he is the Music Director and Conductor of The Miami Symphony Orchestra and continues to guest conduct actively in Europe. He has made more than 60 CDs that range from the Brahms complete symphonic cycle to surveys of Latin America’s greatest orchestral composers.

Born in Caracas, Marturet studied in Cambridge, England where he became firmly rooted in the European tradition, obtaining a degree in Piano, Percussion, Composition and Conducting which he studied with Brian Thomas, Franco Ferrara and John Carewe.

In 1979, he returned to Venezuela with a permanent position with the Orquesta Filarmónica de Caracas as Associate Conductor and later as Artistic Director to the Orquesta Sinfónica Venezuela, where he served in that position until 1995. Presently, he maintains close contact with the Venezuelan National Youth Orchestra movement, giving advice and support in aid of poor children.

With the opening of the Teresa Carreño Theatre in Caracas in 1984, Marturet became its first Music Director. After three years of bringing challenging and original productions to the stage, he resigned from the Theatre to dedicate himself entirely to an international career, conducting in Italy, Greece, France, Spain, England, Denmark, Holland, Korea, Norway, Sweden, Germany, Czechoslovakia, Belgium, Canada and the United States.

Since 2006 he has been the Music Director and Conductor of the Miami Symphony Orchestra, during his 16 year tenure Maestro Marturet has taken MISO into the world-class professional symphony of Miami developing a unique classical-crossover repertoire in alliance with great producers such as Emilio Estefan, Rudy Perez and Burt Bacharach.

In October 2012, he was named one of the “100 most influential latinos in Miami”. The ceremony was performed by Fusionarte Association, Pan-American Foundation and Televisa publishing. This same year, in March, the flag of the United States was flown over the U.S. Capitol in honor of Eduardo Marturet, who received the Medal of Merit of the U.S. Congress in recognition for his outstanding and invaluable service to the community.

In 2014, Maestro Eduardo Marturet was selected as a Steinway Artist, a distinguished list of musicians that includes classical pianists like Lang Lang, jazz stars like Diana Krall, pop icons like Billy Joel, and “immortals” like Irving Berlin, Cole Porter, Sergei Rachmaninoff, and Arthur Rubinstein.  In 2018, The Miami Symphony Orchestra, under the direction of Maestro Marturet, paid homage to the memory of Zaha Hadid, ARCHITECT – ARTIST – THINKER (b. 1950 in Baghdad, Iraq; d. 2016 in Miami, USA) with the premiere of his composition @Zaha’s Place, a meditation on sound and space.

In 2019, was inducted into the Genius 100 Visions Group, “an active and engaged community of 100 exceptionally imaginative and impactful human beings. Genius 100 brings accomplished and compassionate minds together to re-imagine the future – and to implement creative initiatives to improve it.

The organization is inspired by Albert Einstein’s words: “A new type of thinking is essential if mankind is to survive and move toward higher levels,” and it includes world renown luminaries like US Justice Ruth Bader Ginsburg, architect Frank Gehry, and conductor Zubin Mehta, all great visionaries [who] raise the bar on what is achievable within their fields. Collectively, in collaboration, they can make the impossible possible.

That same year, he conducted the recording session of the Miami Symphony Orchestra’s soundtrack television series from Telemundo “La Reina del Sur” Season Two who won a 2020 International Emmy for Non-English Language US Primetime Program. The creation of the soundtrack for the series second season was the result of the partnership between himself, and Marcos Santana, President of Telemundo Global Studios, who was also Show-runner and Executive Producer of the series.

More recently, he was part of a historic event that took place on Sunday, Mar. 14, Einstein’s birthday, when Astronaut Dr. Soichi Noguchi (JAXA, Japan Exploration Agency) was inducted as a Genius 100 Visionary. During this historic event, Planet 9, an opus Maestro Marturet composed exclusively to be performed in space, was performed for this occasion. Marturet and many other Genius 100 Visionaries took part in this once-in-a-lifetime experience.

Eduardo Marturet has been a Steinway artist since 2014.